Bell, Book & Candle also referred to "Bell Book or "The Bell Book" is an eclectic shop located on Main Street in Middleton. Cassie Nightingale opened the shop shortly after she moved into town. While the store wasn't originally embraced by the town, they came around and began to love the shop. It is now one of the most popular stores in Middleton.

The store was founded in 2008 and has currently been open for thirteen years. 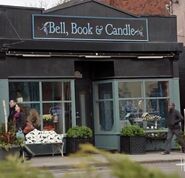 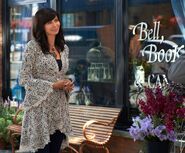 In The Good Witch film