The Endicott family is a prominent family in the town of Middleton, that has a respectful and honorable lineage.

On April 12th, 1922, Douglas Endicott was recorded to have saved a family and their children from a hotel fire. He was given an award for his bravery and became a pillar of the community, remembered throughout the ages for his brave act of heroism. It was this act that established the Endicott family in Middleton in society. It wasn't until the late 2000s, that it was discovered that Douglas had attended the opening day of a Chicago Cubs game, which he was a fan of, on the same day as the fire.

Back in Middleton, his wife, Doris, had attended the hotel for an illegal poker game run by Richard Shanaman. While she was in attendance, the hotel caught fire and she saved those from the fire and carried them to safety. Due to the societal standards in the 1920s, women were frowned up for attending poker or card games. To protect their family name, Douglas received the award on his wife's behalf, leaving the world to believe he was the hero. Years later, Doris earned the credit that she deserved when Grace Russell uncovered the truth about the events that happened at the hotel fire.

A cherished town tradition was started when the Endicott's gifted the Merriwick's their family blanket, that was then handed back and forth between the two families with each new baby. That is, until the birth of Dylan Tinsdale when it disappeared. Martha, the mother of Dylan, blamed her cousin Maxine Endicott for the theft.

Approximately a hundred years later, the latest and only known descendant of Douglas and Doris is Martha Tinsdale. Martha married her husband, Tom, and they settled down together in Middleton. They soon welcomed two sons, Michael and Dylan. Martha then supported her husband as he ran for Mayor and was his second-in-command and major support system while he was Mayor. Around 2015, Martha was elected Mayor of the town. 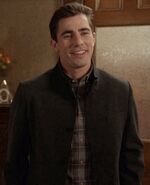