George O'Hanrahan is a character in Hallmark Channel's The Good Witch series.

George is the father of Jenny Russell and former father-in-law to the now-deceased Jake Russell. He has two grandchildren via Jenny, Brandon, and Lori Russell. He is also a grandfather figure to Jake's daughter, Grace.

He currently works and resides in Grey House.

In his early life, George was a mechanic and frequently worked on automobiles. He later joined the Air Force but was unable to enlist due to his vision. Instead, they made him an airplane mechanic. He had a large group of friends, including Harry, and they were in the trenches together. They were best friends and kept in touch throughout the years.

The last of his friends, Tommy Manetti, died in the later 2000s. Whether George was married when Jennifer was born is unknown, though he was the primary father figure in her life. She married police cadet Jake Russell in the early 2000s, and moved out of their home and in with Jake.

Jennifer and Jake had two children later in their marriage, both of whom George was very close with. After Jennifer died of cancer, George moved in with Jake, Brandon, and Lori to help Jake balance being a single father.

George is the elderly father-in-law of Jake Russell and lives with Jake and his two children, Brandon and Lori.

George received news that the last of his longtime friends, Tommy Manetti, had died. This sent Georgie into a depressive spiral which Cassie noticed. She managed to help pull George back from the brink, by first asking him to help fix her car, as he used to be a mechanic when he was younger.

Cassie then asked him to run her bed and breakfast so that she could focus on Bell, Book & Candle, her career as mayor of Middleton, and her newborn daughter, Grace. These actions helped George feel useful once again and led to higher spirits and improved relationships with his family.

George is wildly kind and compassionate to those he considered family and friends. He can be abrasive to people he doesn't particularly care for and has strong opinions when it comes to Middleton and his family. George gives decent advice to his Granddaughter and likes to keep himself busy with some type of handy work around Grey House.

In The Good Witch film series, George is an older man in his either mid to late fifty's or early sixties. In the television series, he is in his seventies.

George has thinning grey hair and wide blue eyes. He has prominent features such as his nose and wears relaxed clothing such as flannels, jeans, or khakis with sneakers. He is always clean-shaven and put together. 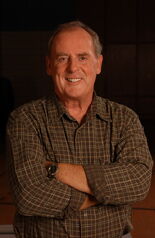 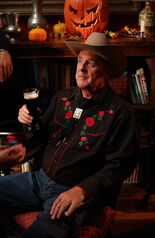 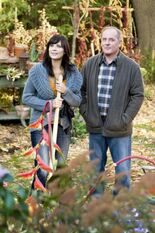 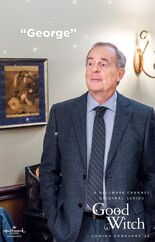 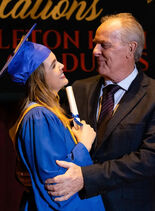