Grey House is the oldest home in the town of Middleton and a historical landmark to many citizens of the town.

The home was once owned by Middleton legend, Elizabeth Merriwick, who later became known as the Grey Lady. It is currently owned by her great-great-granddaughter, Cassie Nightingale. It is stated to have 11 bedrooms; however, this is contradicted by Cassie's blueprints from season 7.

Originally owned by Elizabeth Merriwick in the early 1800s, Elizabeth was a homebody and preferred the comfort of her house over the company of others. She was well-known throughout the town and rumored to have been a witch. After her death, the house was abandoned and became run-down. The townspeople of Middleton left the house alone, many people gossiping about how it was haunted or cursed, which led to no one going there.

In 2008, Cassandra Nightingale discovered that the property existed and had been in the Merriwick family for generations, though given the run-down state of the house, presumably none of the "generations" had lived in it. She moved to Middleton and into the Grey House, where she began fixing it up and making it so she could live it in comfortably. Her arrival caused much gossip in the town, as they didn't expect anyone to move into the old, rickety, and presumably haunted house. With a lot of hard work - and a little magic - Cassie was able to make the house habitable, and has lived in it ever since.

In 2009, she began working on the garden and planted her plants and herbs, and the garden seemingly took on a life of its own throughout "The Good Witch's Garden". Cassie began settling in around the town, even though she still faced a backlash from the town. She soon realized that her income wasn't supporting her new home and the renovations it was taking to make Grey House her home. This led her to open the house up as a bed and breakfast, and her first guest was a man named Nick Jason. Nick made it known that he was the long-lost descendant of Elizabeth Merriwick's lover, Charles Hamlet.

After a few days, Nick made a claim to Grey House by showing documents that Elizabeth Merriwick stole the property from Charles Hamlet. This forced Cassie to pack her things and leave the house, where she began living in Bell, Book & Candle. A persistent Jake looked into things, and he discovered that Nick's M.O. was repetitive of another common criminal all over the state. It wasn't until Lori discovered an old book of stories by The Grey Lady that confirmed Charles Hamlet was a fictional character, that Cassie and Jake were able to prove Nick's fraud and reclaim Grey House as her own.

After a few years of living in the house alone, Cassie married Jake Russell in 2010 and he, along with his two children Brandon and Lori, moved into the Grey House with her. Jake's former father-in-law, George O'Hanrahan had moved in shortly before that. In 2012, Jake and Cassie welcomed a new resident, their daughter Grace. When Grace was a child, Brandon and Lori both moved out of Grey House and attended college. A few years later, Jake tragically died in the line of duty; Grace was "eleven" and Lori had just finished college and was about to be sent on her first writing job to the Middle East.

Shortly after Jake's death, Abigail Pershing returned to Middleton and moved into Grey House with her cousins. When Cassie married Sam Radford, he and his son, Nick, moved into Grey House. Subsequently, Abigail Pershing moved out to allow the family to have more room. Upon graduating from high school, Grace and Nick left Middleton to attend college. Nick visits Grey House whenever he can.

Joy Harper has since become a regular guest at Grey House Bed & Breakfast, having discovered her familial ties to Cassie and the Merriwick line. She has seemingly moved into Grey House.

Grey House celebrates its 225th birthday in "The Tableau" (in 2019) and the town celebrates by holding a tableau vivant. As the town of Middleton was established in 1794, Grey House must have been one of the very first buildings. 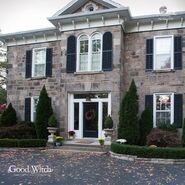