Elizabeth Lennie
Gwen O'Hanrahan is a gardener in Middleton and runs the plant nursery downtown. She is also the mother of Drew, a second child , and is the wife George O'Hanrahan.

Gwen is an older woman in her sixties, with very light blonde hair and bright blue eyes.

George: Sometimes I think it's easier to talk to your grandpa than to your own parent.
Gwen: You listen to her. People don't do that so much anymore. Really listen to children.

George: Do you have grandchildren?
Gwen: Two adorable twin boys. But they live so far away, out on the west coast. Those two used to play in my garden together. They used to pick all my berries.
George: [laughs] Lori too. I call her my berry baby.
Gwen: It's nice running into you, George.
George: Gwen, Cassie sent me here to pick up a plant...[laughs].
Gwen: What's so funny
George: Cassie. She's quite a lady. She's probably expecting me, but uh I have a feeling she wouldn't mind if I asked you out for a cup of coffee. Would you join me?
Gwen: Sure.
George: Good. 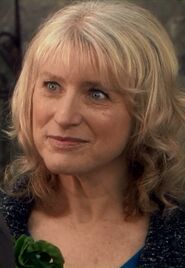