This article is a stub. You can help The Good Witch Wiki by expanding it.

The harvest festival is a yearly event held between Middleton and Blairsville. It mirrors the long-standing feud between the neighboring towns.

This harvest festival is the first in which Abigail Pershing serves as the Mayor of Middleton, and Donovan Davenport as the Mayor Blairsville. Ronnie Sue Campbell judges the pumpkin pie contest.

There are five competitive events. The towns each select one resident to represent them in the stages. Participants must win three out of the five events in order to win the festival competition. The winners are marked with a pumpkin on their respective headers. 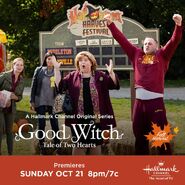