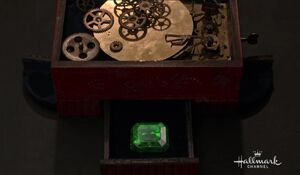 The Middleton Treasure is a formerly lost treasure that Middleton founders, Nathaniel and Meredith Merriwick, hid in 1794. Over time, residents forgot about the treasure and it became another piece of lore in the town.

After founding Middleton, Nathaniel and Meredith Merriwick wrote a charter detailing the town. They also incorporated a hidden message to help the next Mayor find a treasure they hid somewhere in town. It was rumored that they hid a trove of treasures when they arrived from the old world. But the location of it was lost with the duo in the great flood.

The day before Founders Day, Mayor Martha Tinsdale discovers the original town charter in a secret alcove in the archives of City Hall. She called an emergency town meeting to share the discovery. She asks Abigail if one of the markings on the charter is a Merriwick symbol, to which Abigail states that it is the symbol of water. Mere seconds later, a glass of water spills onto the charter, revealing two additional symbols. The symbol for fire and an X, which Martha believes could mark the spot of the fabled Middleton treasure.

Martha enlists the help of a sea master Vincent to find the treasure. She gives Vincent the charter to help him in his hunt and Middleton's historian, Natalie, offers to help. He ponders that the treasure could be in a fireplace. Natalie notes that the X could be a 10 - ten fires. Around the 1700s, the town's windmills went up in flames. The plaque dedicated to the windmills is near Fosters Woods - the next clue might be there.

They eventually go to a sundial where Vincent realizes that time is the key. He tells her to imagine a clock on the face of the charter. The date, October 12th, is 12:00. That puts the X in the 10:00 position. The fire symbol could stand for light and light plus the time of day brought them both to the sundial which has been present since the town was founded. When Vincent steps to his left the light shines through the dial to reveal the symbol for air.

Sam finds Vincent working on the charter and translates the wording, "veritas intus jacet" to "the truth lies within". The watermark and the X were hidden within the charter. The clues could be based on the four elements. The symbol looks like a flag and flags fly at different locations such as City Hall. City Hall was built when the town was founded. The stain glass window on the side of the building is divided into four rows - revealing the symbol for air.

On the stained glass windows, they find windmills with different numbers etched into the blades. When the roman numerals are put together they reveal the longitude and latitude of Wishing Well Park. Once there, Natalie finds the symbol for Earth carved into one of the stones of the well. She carves out the stone revealing a secret compartment with a box inside. Martha opens the chest which is filled with nothing but sand.

While speaking to Martha, Sam realizes that every great detective story has a red herring. He realizes one of the knobs of the scroll unscrews to reveal a key.

Sam is adamant about finding the Middleton treasure and is trying to figure out what the old-fashioned key opened. After George was finally able to get a 200-year old safe opened – acquired from Mrs. Hanson - Sam found yet another clue, written in Latin. The clue led him and Cassie to the underground tunnels of Middleton. Using symbols found on an old fireplace salvaged from the town’s former Meeting Hall, Sam and Cassie finally unearthed the Middleton treasure. It is a music box that had been long rumored to belong to Nathaniel and Meredith Merriwick, the founders of Middleton. But there was much more to the music box than just playing a lilting melody. When the music stopped playing, three hidden drawers opened up. One of those drawers contained a giant emerald, but the other two drawers were empty, however, Martha mused that the “diamond and ruby” were missing.

The four elements play a crucial role in the discovery of the Middleton treasure.

Music box with the emerald

Heart of Middleton fits inside