The Good Witch Wiki
Register
Don't have an account?
Sign In
Advertisement
in: Place, Places in Middleton 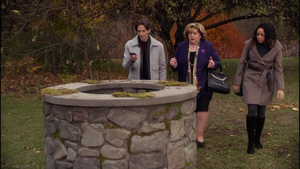 Wishing Well Park is an iconic park within Middleton. It is not only a public gathering spot but is home to the notorious Middleton wishing well.

Legend of the Well[]

According to legend, any couple with throws a coin into the well together will have a happy relationship. Many couples over the decades have done this, including the Davenports and Tinsdale's. Abigail and Donovan once threw a coin in together in the hopes that it would help break the curse, though they weren't as lucky. However, after having thrown in the coin another clue to breaking the curse revealed itself, so the magic of the well may have worked in its own special way.

In "The Prince", Blairsville Mayor Donovan Davenport goes head-to-head with Middleton Mayor Abigail Pershing over Wishing Well Park. Davenport Industries purchased the land and wants to turn the park into a golf course by bulldozing the wishing well. Donovan argues that the well is the birthplace of the Merriwick-Davenport Curse. Abigail argues that it is a Middleton landmark and she plans to block Davenport Industries permit to build on the land. Later, Davis Davenport, Donovan’s father, meets Abigail at the Mayoral office. He urges her to allow him to build his country club on the Wishing Well property. The two don’t exactly see eye to eye, as Abigail believes the property is a staple for Middleton. She plans to block his proposal.

Davis is confronting Abigail when Donovan stops his father's antics and, as the Mayor of Blairsville, refuses to approve the action as well, thus siding with Abigail. Davis is confused as he thought Donovan would want the well torn down since it's the birthplace of the Merriwick-Davenport Curse. Donovan believes in the curse but reminds Davis that he and Dotty once threw a coin in the well. Reminded of his youth, Davis agrees to back down. That night, Abigail and Donovan throw a coin into the well in the hopes it will reverse the curse.

In "The Treasure", Mayor Martha Tinsdale encourages Vincent and Natalie to find the Middleton Treasure. On the stained glass windows of the city hall, they find windmills with different numbers etched into the blades. When the roman numerals are put together they reveal the longitude and latitude of Wishing Well Park. Once there, Natalie finds the symbol for Earth carved into one of the stones of the well. She carves out the stone revealing a secret compartment with a box inside. Martha opens the chest which is filled with nothing but sand. The clue ultimately helps them to discover the Middleton Treasure.

In The Wishes, Abigail, Joy, and Cassie travel to Wishing Well Park in the hopes that the well can help them piece together the purple bag mystery. When Joy drops her coin she hears a clunk instead of a splash, which is seconded by Abigail's coin. Abigail also drops her engagement ring but hears the clunk too. When Cassie makes her wish it lands in the water with a splash. They investigate using the flashlights on their phones and learn that the bucket once used with the well still exists. Joy bends over while Cassie and Abigail ensure she doesn't fall. She pulls up the rope and gives Abigail back her engagement ring. Over forty coins rest in the bucket - all unfulfilled wishes. Cassie decides to dump the coins back into the well to grant them. Throughout the day, many Middleton residents begin to experience their wishes coming true. From Stephanie being reunited with a past love, to Martha earning her dream tickets to Buenos Aires, only to cancel her trip due to a wished-for sprained ankle, the wishing well's magic works in spades. Finally, Joy is given a clue to the purple bag mystery as part of her wish.

Hidden in the well